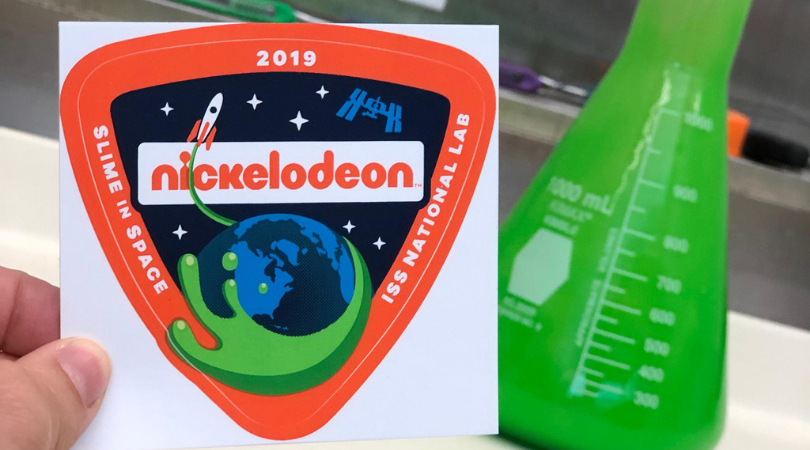 NASA has sent Nickelodeon Slime into space! A packet of slime was launched with the recent SpaceX Dragon cargo spacecraft and safely made it aboard the International Space Station on Saturday July 27, 2019.

Earlier this month, the ISS U.S. National Laboratory announced that various private-sector research materials would be sent to the ISS on SpaceX’s 19th commercial resupply services mission. Included in the list along with the slime were antibodies for cancer research and silica structures for tire research.

The CRS-18 mission (and the slime) were ready for liftoff last Wednesday, but were delayed for a day due to poor weather conditions. On Thursday, the skies cleared and the Falcon 9 rocket successfully launched Dragon with its cargo into space.

Two days later, on July 27th, the slime and other cargo arrived safely as Drago successfully attached to the ISS.

So why is slime being sent to space? According to the ISS National Lab, the slime will undergo “a series of science demonstrations that will educate students on the basic principles of fluid flow in microgravity versus normal gravity on Earth.”

The plan is for the experiments to be filmed and shared on Nickelodeon’s tv and streaming channels.

As someone, who as a kid, had the unique opportunity to be slimed with Nickelodeon Slime, I am VERY excited about these new experiments. I can’t get the image of a bunch of astronauts having a water balloon-esque slime fight while orbiting the earth at 17,150 mph (27,600 kph).

In this article:ISS, Nickelodeon, Slime