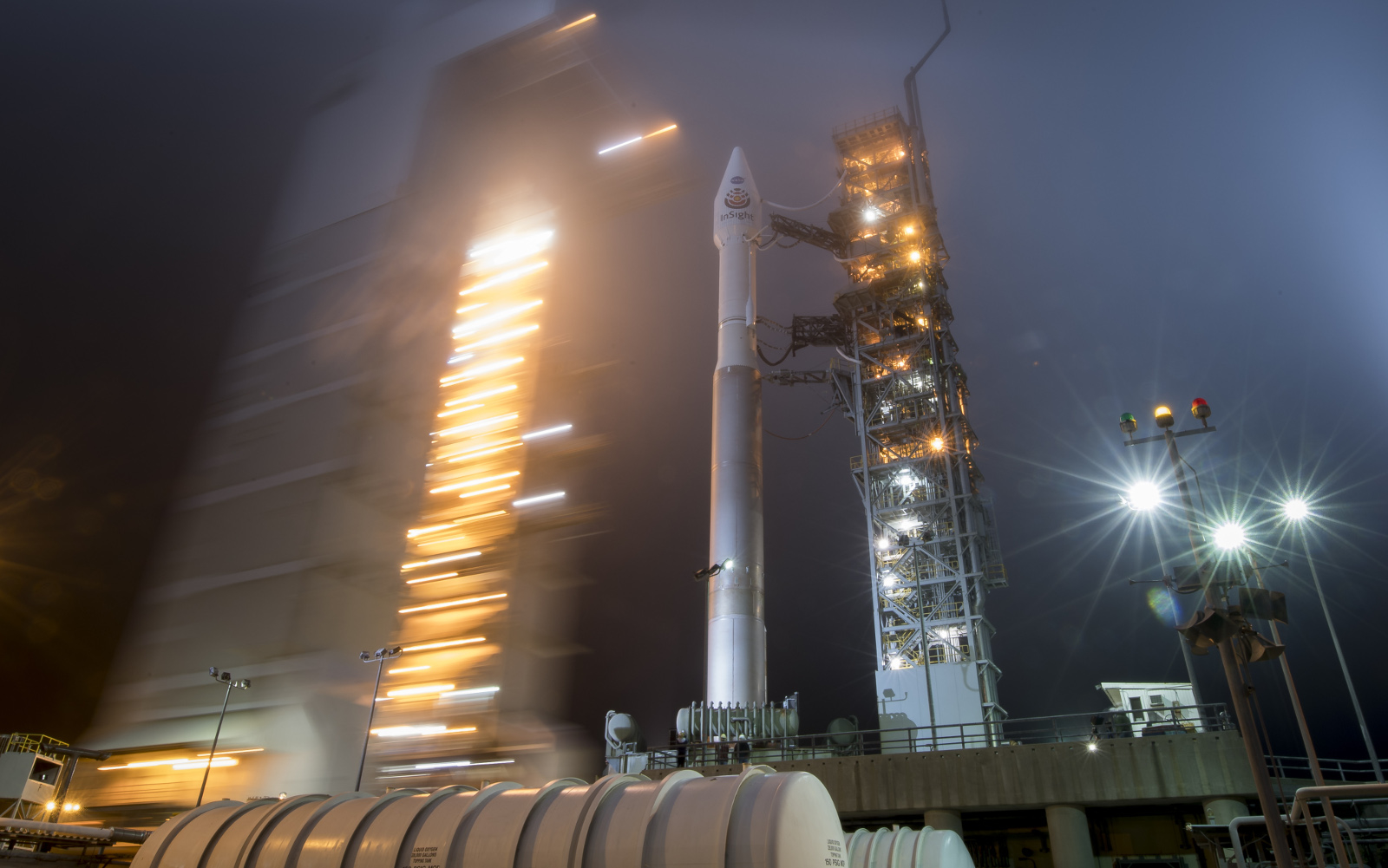 The mobile service tower at SLC-3 is rolled back to reveal the United Launch Alliance (ULA) Atlas-V rocket with the NASA InSight spacecraft onboard, Friday, May 4, 2018, at Vandenberg Air Force Base in California. InSight, short for Interior Exploration using Seismic Investigations, Geodesy and Heat Transport, is a Mars lander designed to study the "inner space" of Mars: its crust, mantle, and core. Photo Credit: (NASA/Bill Ingalls)

This weekend, I had the privilege of watching a rocket launch right before my eyes, and in-person! Well, sort of.

That might sound like a big deal, and it is. This past Saturday, at precisely 4:05 AM PST, I was standing nearby NASA Vandenberg Air Force Base’s Launch Pad 3.

Sitting atop its mighty ground stood InSight – the piece of technology that will travel 300 million miles from the California coast to Mars. InSight is special for several reasons, as I mentioned in my previous post.

For one, it is the first EVER interplanetary launch from the West Coast. Not only that, but it will study the interior of the red planet, as well as provide insight (get it?) to planets around distant stars, and how likely those possess climates and conditions that would be habitable to life. If all goes well, then a heat shield, parachute, and rocket engine will slow InSight to a safe landing in a flat plain just north of the Martian Equator known as Elysium Planitia, about six months from now.

The moment I heard about this launch, I knew I had to be there. Every launch to space that I’ve watched before, I had seen behind the lens of a camera streamed onto my laptop or TV screen. And that’s great, they excite me just as well.

But InSight invoked an interest even stronger. This is about Mars, the headlining planet, and California, my endeared home-state. How could I miss it? In spite of the six hour, 245 kilometer (150 mile) trip, I packed my Star Wars suitcase, threw on my orange bomber jacket, and grabbed my boyfriend, David, whereby we headed up North together.

I slept in Santa Barbara, woke around midnight the morning of to get ready, and drove to the Lompoc Airport where they had opened their tarmac to the public for viewing.

To my surprise, there were dozens, if not, hundreds, of people arriving with me to prepare to watch. They even provided booths within a tent, decorated with several Mars, InSight, and NASA memorabilia for display or sale.

At around 3:30 AM, we claimed an open spot on some bleachers and pulled out our phones to listen to commentary playing on the NASA livestream. Again, I love it.. but the feeling of actually being at the site was incomparable.

Then, close to 4:00 AM, the airport lights went dark. People cheered, laughed, and cried with excitement for what was coming next. One by one, we heard the proper signals: weather, set-up, stations, all green.

And it began. The crowd cheered in unison: T minus Ten. Nine. Eight. Seven. Six. Five. Four. Three. Two. One.

To everybody’s dismay (and amusement), we saw nothing. No rocket. No blip. Not even the faintest trail of a light, despite how close we were. The fog blanketed the sky in a film that literally could not have been penetrated by even a rocket. Slowly, people reluctantly began to close their film apps and hide their phone, since there was nothing to record. Once it hit Mach 1, we knew it was totally gone.

But we did hear it and feel it. The volume of the thrust could not be silenced, and the rumble that shook the ground was unmistakably delicious. The trip to Vandenberg was not a waste, and for my first in-person launch, I am glad I was able to simply be in the presence of such an accomplishment for mankind and space exploration.

InSight was a project manufactured by Lockheed Martin Corp, where David works, and overseen by NASA Caltech/JPL, where I attend and hope to work at one day. On the journey home, we joked about what our work together would look like. “GO FOR GROUND LAUNCH SEQUENCER. RETRACT ORBITER ACCESS ARM. START AUXILIARY POWER UNITS… BY THE WAY, WHAT DO YOU WANT FOR DINNER?”

In this article:Featured, InSight, Lia, Mars