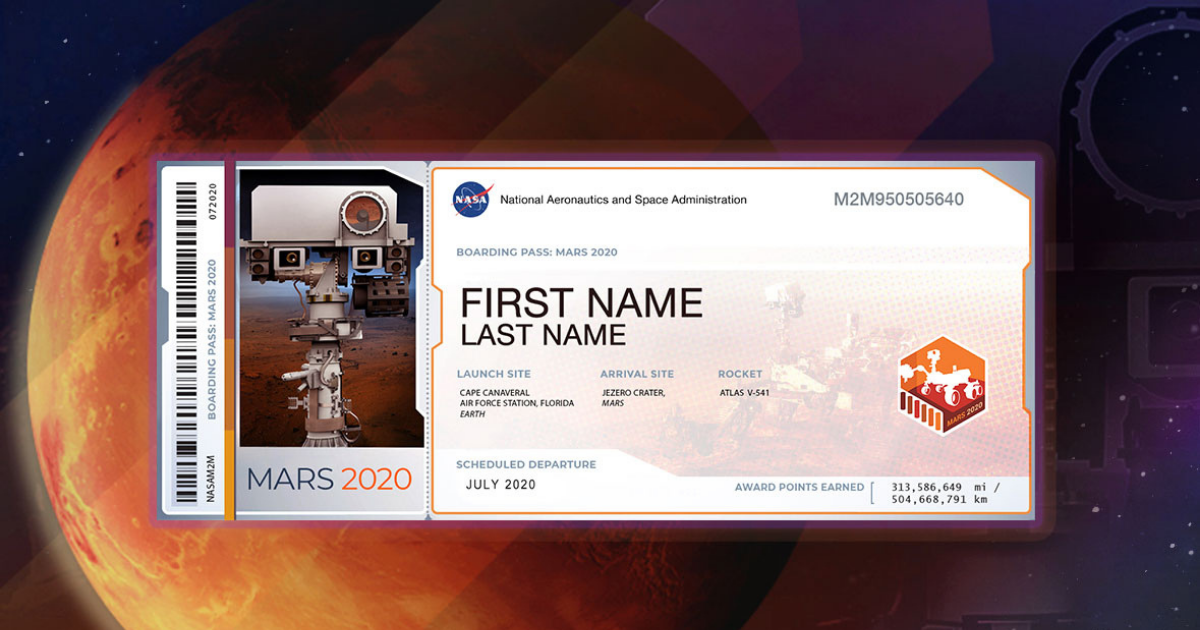 Don’t pass up a unique opportunity to send your name to space! In July of 2020 NASA is launching a rover to Mars to explore the red planet and collect rock and soil samples. In addition, the rover will hold a silicon chip with names engraved on it.

The deadline to send your name to Mars is approaching quickly. NASA is accepting name submissions until September 30th. In addition to sending your name to Mars, each person who signs up can download and print out their own souvenir boarding pass which acts as a certificate of proof.

Why Send Names to Mars?

The opportunity allows for everyone to take part in this mission to Mars. It is a chance for those interested to feel like they are intimately a part of the journey and process. It also heightens awareness for the mission. Thomas Zurbuchen, associate administrator for NASA’s Science Mission Directorate in Washington stated, “As we get ready to launch this historic Mars mission, we want everyone to share in this journey of exploration.”

How to Submit Your Name

To submit your name to be etched on a chip that will sit aboard the Mars rover you’ll need to fill out a short form from NASA’s website. They will ask for your first and last name as well as your country, postal code, and an email.

Don’t forget to remember the name you use. If you ever want to go back and see your boarding pass and print it out, you’ll need to remember the exact name and email you used initially in order to access your passes.

How Are Names Sent to Mars?

This isn’t the first time that names have been sent to space. The trend began in 2011 with the Mars Science Laboratory mission where names were sent to Mars aboard the Curiosity Rover.

Each name that is submitted and approved will be etched onto a silicon chip by an electronic beam. Each line of names will be smaller than the width of a human hair. A single dime-sized chip can hold over one million names. NASA is prepared to send several chips to accommodate with a high amount of submitted names.

According to NASA, over 9.4 million names have been submitted so far.