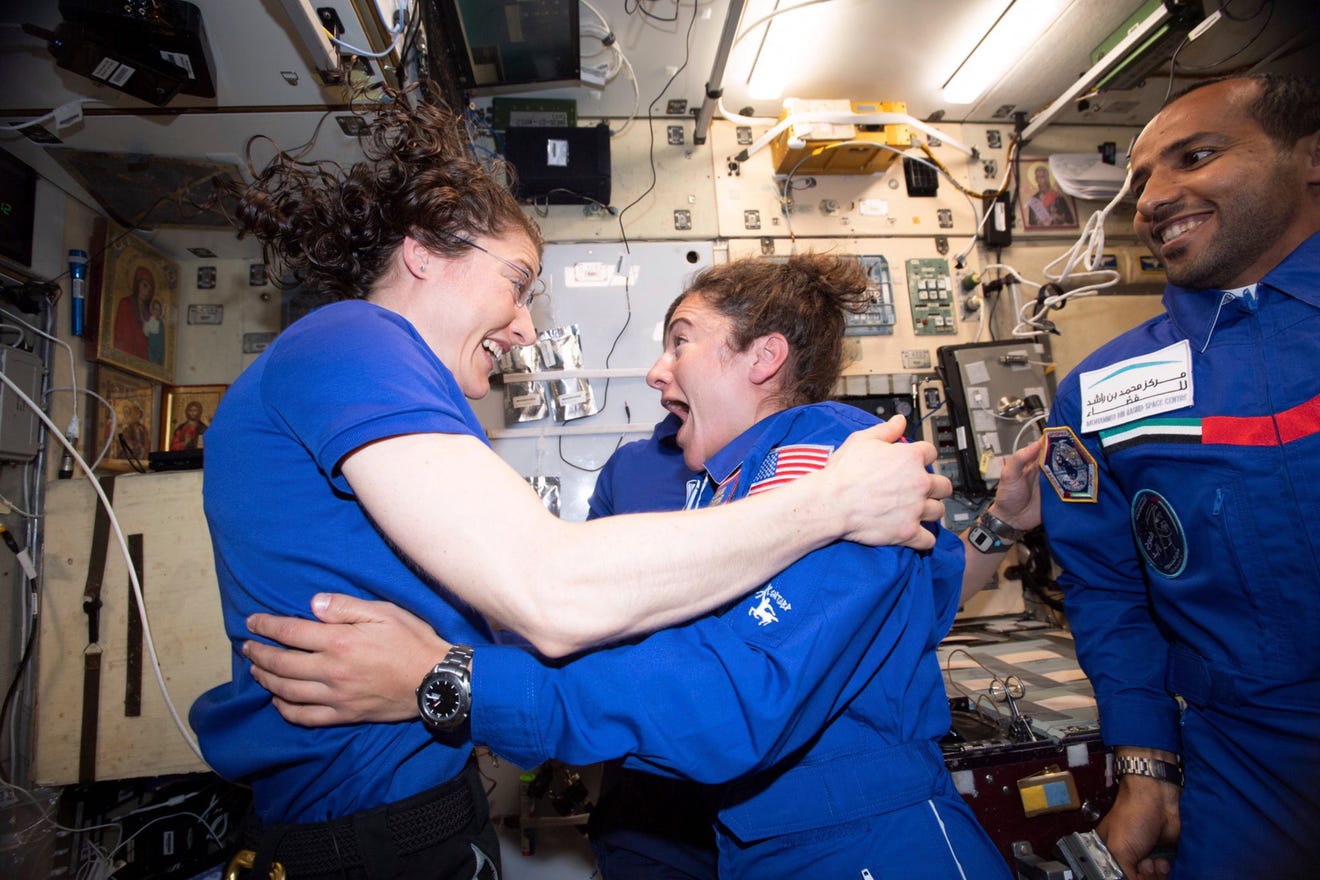 Astronauts Koch and Meir embrace aboard the ISS.

Before tomorrow’s historic spacewalk, lets take a look at the two astronauts who will be performing the repairs.

Astronaut Koch studied electrical engineering at the undergraduate and graduate level at North Carolina State University. In 2013 she was selected as an astronaut and began astronaut candidate training in 2015.

Before being chosen as an astronaut, Koch worked at NASA as an Electrical Engineer in the High Energy Astrophysics Laboratory at the Goddard Space Flight Center.

As a NASA astronaut, she is trained to perform scientific and technical work including spacewalks.

She has been in space aboard the International Space Station since March 14th of this year and has been a member of three missions (59, 60, and the current 61).

Astronaut Koch has a total of 20 hours of Extravehicular Activity logged so far, and Friday’s spacewalk will add on an additional 5 1/2 hours.

Fun Fact via NASA: Koch is slated to set a record for the longest single spaceflight by a woman with an expected total of 328 days in space.

Astronaut Meir studied at Brown University where she graduated with a BA in Biology. She then earned her MS in Space Studies from the International Space University. For her PhD, Meir studied emperor penguins in Antarctica and earned her PhD in Marine Biology in 2009 from Scripps Institution of Oceanography.

Before her career as an astronaut, Meir worked as an assistant professor of biology at Harvard University while continuing to study mammals in extreme environments. Additionally, she has experience working for NASA doing human physiology research at Johnson Space Center. She did research with the reduced gravity aircraft program and was a crew member in the Aquarius underwater habitat.

Meir is currently in space for her first time as part of expeditions 61 and 62 where she works as a flight engineer.

Friday’s spacewalk will be Meir’s first EVA experience and she is planned, during her six month stay in the ISS, to make at least one other spacewalk.

Fun Fact: Meir holds dual citizenship with the USA and Sweden, making her the first Swedish woman in space and the second overall Swedish citizen in space.

Koch and Meir will follow 13 other female astronauts who have performed EVAs, but their spacewalk will be their first all-female led EVA in NASA’s history. Don’t forget to tune into their EVA starting at 6:30 AM EST on NASA TV for live coverage.