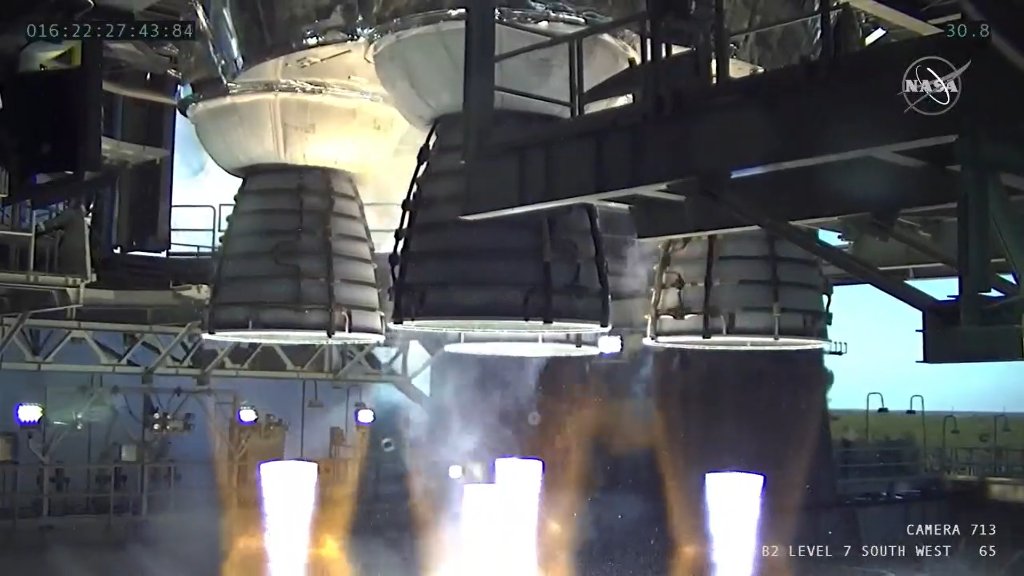 During a test of the Space Launch System (SLS) Rocket that will launch the Artemis I mission to the Moon, an unexpected engine shutdown occurred. The engine test was the first step in a series of preparations that will eventually send a spacecraft to the Moon.

Artemis I is the name of the future flight test of the deep space exploration systems being developed at NASA. NASA’s Deep Space Exploration Systems include the Orion spacecraft and the SLS rocket. The mission will prepare to send the Orion around the moon and will prepare and test technology that will be used by a crew in later Moon missions.

Saturday’s Core Stage test was the final “Green Run” test of the SLS. The term, affectionately coined by NASA refers to a series of testing firsts for each stage of launch. The core stage of the SLS includes the engine section, liquid hydrogen tank, intertank, liquid oxygen tank, and the forward skirt – all spanning a total 212 feet.

The test called for the four engines to fire for eight minutes which will be the same amount of time the engines will fire during launch before reaching space. However, engine 4 experienced what NASA is calling, “Major Component Failure.” After the engine 4 failure, the engines shut down after 67.7 seconds.

Of the test, NASA Admin Jim Bridenstine commented: “Saturday’s test was an important step forward to ensure that the core stage of the SLS rocket is ready for the Artemis I mission, and to carry crew on future missions. Although the engines did not fire for the full duration, the team successfully worked through the countdown, ignited the engines, and gained valuable data to inform our path forward.”

Additionally, John Honeycutt, the SLS program manager at NASA’s Marshall Space Flight Center added: “Seeing all four engines ignite for the first time during the core stage hot fire test was a big milestone for the Space Launch System team. We will analyze the data, and what we learned from today’s test will help us plan the right path forward for verifying this new core stage is ready for flight on the Artemis I mission.”

In this article:Artemis I, Artemis Program, Featured, Launches, Moon Missions