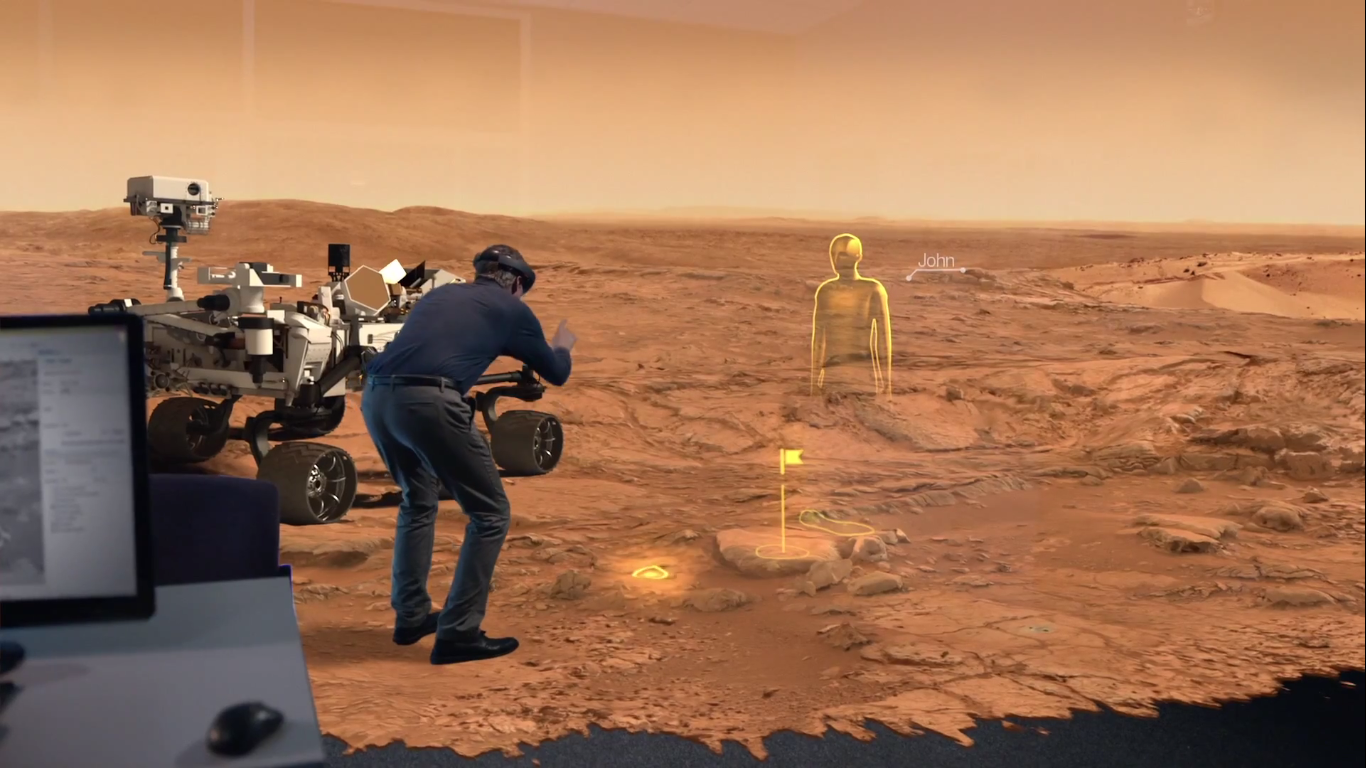 Virtual and augmented reality promise to transport us to places that we can only imagine. And ever since the Mariner-4 spacecraft took the first-ever flyby photos of Mars, we Earthlings have dreamt of traveling to Mars, uncovering its splendors, and exploring its iron-rich terrain. When joined with spacecraft and robots, these sci-fi technologies will extend humanity’s presence to real destinations that are equally fantastic.

When you’re trying to communicate with small robots literally millions of miles and kilometers from Earth, the easiest way to visualize the challenges this distance brings is by picturing a small modem from your childhood memories. Remember when it took ten minutes just to download a ringtone?

As big and brilliant as NASA technology is, this “bandwidth” dilemma is still an obstacle scientists face today. Precious data, images, and messages we receive from our beloved Mars rovers take a long time to download.

Unfortunately, this means that scientists here on Earth have very limited windows of time to operate and record all the rovers’ potential. The bright side is that we have engineers and software developers around the globe working on resolving these types of issues, and one solution that’s been brought to the Jet Propulsion Laboratory is the utilization of augmented and virtual reality of the Martian ground.

The program, called OnSite, takes users to the surface of Mars when they put on the headset. On an everyday basis, scientists collaborate on a virtual landscape for meetings, gaining a perspective of location, and observing their geological surroundings.

Not only is the content totally live and consistently updated, but the images streamed to the map are real, genuine, and accurate, with no 3D modeling or computer rendering needed. 100% of the images are taken by the Curiosity rover, and as you walk, you’re able to select any particular rock or piece of the map and see the actual images before they were pieced together.

This technology benefits the MSL team in a number of ways – the primary reason being they are able to downsize the time constraint.

Now, very quickly, they are able to meet in the mornings and wear the headset to visualize where they currently are. Are there any particular rocks or craters in their area they should focus on that day? Rather than making a decision based off grayscale, 2D graphics, the virtual landscape significantly simplifies the decision-making process.

Other benefits include intercontinental meetings and field work; the future of this technology will reflect advancements in these areas.

Rather than flying a plane to meet with officials at the European Space Agency or pulling up an impersonal Google Hangout, NASA scientists will be able to “meet” with their overseas colleagues in the same room, face-to-face with their avatars only a few feet away.

Furthermore, geologists and field chemists will actually have the opportunity to experience field work on Mars before anybody really steps foot on its soil. Scientists will be able to “pick up” rocks, and gauge their size, color, shape, and material composition, or sketch their landscape – in the name of science, or more heartwarmingly, in the name of love for the project.

This past Thursday, the Jet Propulsion Laboratory held a lecture on Martian VR and AR, hosted by MSL Operations Lab Lead, Victor Luo.

I had the pleasure of privilege of participating in a Q&A panel, and as I took notes, two questions struck a cord with me:

One, by an audience fan: “Do you envision having astronaut spacesuit helmets being able to overlay information, such as navigational instructions and oxygen levels?”

Luo’s response: “Yes. In fact, we have engineers over at NASA-Johnson working on that right now. It’s a unique challenge, because you can’t have a screen. That’s the only rule. So we need to figure out how to get the projections on a “screen” in a way that feels like it’s at the right depth for you, but also doesn’t obscure your task. But it’s an interesting challenge that makes perfect sense.”

Slightly unrelated, a wildcard question from another audience member: “Are you thinking of creating an Avatar machine? Where you can actually go there to hear, smell, and touch?”

Software developer and panel leader Parker Abercrombie responded: “It’s definitely something we’ve thought about, but we’re limited to the data we get back from the rover, so sensations like smell I think we might be a couple of rover missions away from. Sound – the next mission might have a microphone. But you probably wouldn’t want feel – the temperature on Mars is a little too cold.”

So there you have it. Video games, Marvel Comics, and even a little bit of James Cameron all play an influence on NASA. And while each venture serves its own purpose, they all share the goal of advancing the next giant leap for mankind.